This past week my family and I got to go camping in northern Wisconsin.  We had really only one goal–rest.  It was great to enjoy God’s creation and get away from the busyness of life.  Because of our mortal bodies we need times to step back, recharge the batteries, and rest.   One of the more popular sayings of Jesus is found in Matthew 11:28 as he says, “Come to me, all who labor and are heavy laden, and I will give you rest“.   However, is the rest Jesus is offering to us similar to the rest we experienced camping?  Is the rest Jesus offered a rest from the daily grind?  I would argue, no.  It is a much greater rest. 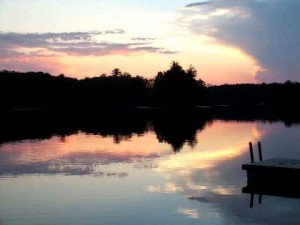 To understand what Jesus is offering we need to follow the theme of rest throughout the Scriptures.  The first time we see rest is in the opening pages of Genesis.  After creating the world and all that is in it, Scripture tells us that God “rested” on the seventh day.  Now God being all powerful obviously did not need rest to recharge his batteries; rather, this rest was one of fellowship.   God had perfect fellowship with his creation which included mankind.

However, as we continue to read Genesis we read that sin had entered the world. Because of sin there was now pain and death.  Because of sin the fellowship mankind once had with God was now broken.  There was no more rest, rather there was separation.  Man was found in a hopeless situation, and the question is now asked, “how does man get rest with God back?”

As we continue to read through the Old Testament we see pictures of rest that provide some hope.  God gave the children of Israel the 10 commandments, with one of them being to keep the Sabbath Day (Exo 20).  On every seventh day, God’s people were not to work; rather, they were to rest and keep that day holy.  However, while the Sabbath was a blessing from God, even if one kept it perfectly they could never restore what was lost at the fall.

After wandering in the wilderness for 40 years, Joshua led the Israelites into the land God promised them as they fled from Egypt.  As Joshua and the Israelites crossed the Jordan River, God told his people that he was giving them a place of “rest” (Joshua 1:13).  However, once again as we continue to read through the book of Joshua we see anything but rest.  We read about wars and death.   Just as the Sabbath was a blessing, the land given to Israel was a blessing; but it did not restore what was lost at the fall.  Mankind still was separated from God.

The next time we once again see this “rest” language is found in Psalm 95 as the psalmist tells mankind to not harden our hearts as those have in the past.  Because of our hardness of heart, Psalm 95 tells us that we will not enter into God’s rest and are in fact under his wrath.

All of this brings us to Jesus.  As mentioned earlier, mankind is in a hopeless state.  The fellowship mankind once enjoyed with God is completely broken.  While God gave mankind some pictures of rest throughout the Old Testament these pictures were not enough to bring about restoration.  However, praise be to God that he sent his Son into the world, to live a perfect life, to die a perfect death on the cross, to rise again from dead, and to offer rest.  The rest Jesus offers is much greater than any rest we could receive on vacation.  The rest Jesus offers lasts throughout eternity.  The rest Jesus offers restores the relationship mankind once had with God.

Today if you have not trusted in Jesus I plead with you to forsake your sin and the rotting treasures of this life and come to him.  It is through Jesus and him alone that there can truly be rest between you and God.  Where would we be without Jesus?