The past week has been an incredibly interesting time to live in Madison.  A proposed budget by the state’s governor has stirred up both the political left and the political right.  One side loves the bill and calls the governor a hero while the other side hates the bill and call the governor a villain.   The same can be said of fourteen of the state’s senate Democrats who are opposing the proposed bill.  One side looks at the senators and praises them for their political action, while the other side looks at the senators and calls them cowards.  Over the past week there have been thousands upon thousands of protestors from both sides of the political aisle in Madison.  Both sides are incredibly passionate about their view and one can hardly have a conversation in town without this issue being brought up.  To say the least it is on the forefront of everyone’s mind. 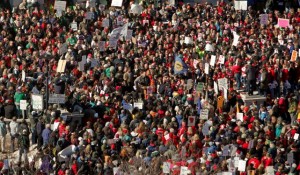 While this is a big political decision and without question many people will be affected, as Christians we must fight to not get consumed with this debate.  Rather as Christians, whose citizenship is in heaven, we must look to minister the gospel to our city.  We must not waste this incredible door of opportunity to share with people the hope that can only be found in Jesus Christ.  Here are some suggestions on how to use the political unrest to bring glory to our Savior:

1.  Point people to the Kingdom of God.  This life will never be perfect no matter who has the political power.  In the Old Testament great kings such as David and Solomon, who were uniquely blessed by God, failed.  There has never been and never will be an earthly government that will be perfectly just and righteous.  We live in a broken world that will not be completely fixed until Christ returns.  Use this situation to explain to people the consequences of the fall both in our world and the consequences of sin in their own personal lives.   Use this situation to point people to the Savior who came redeem a broken world.

2.  Pray for the political leaders.  I have been disappointed in how many Christians on both sides have spent hours marching and protesting around the capital. While I think it is their right to voice their concern, Paul tells us to pray for those in authority over us (1 Tim 3).  Rather than bashing the governor or the state senators, pray for them.  As Christ-followers we are to spend much more time praying than protesting.

3.  Minister grace with your words.  Just as I have been disappointed in how many Christians have spent hours protesting and little time praying, I have been even more disappointed in how little as Christians we have ministered grace to those we talk to.  Once again Paul tells us to let no corrupt talk come out of our mouths but rather use our words to build others up.  Last I checked slander was an offense to God; rather than using our words or our facebook statuses to slander those in politics, use this time to minister grace.  Use your words to give people hope in the gospel.

4.  Be submissive to whatever the outcome is.  At this point who knows what the outcome will be on this political debate.  Without question one side or the other is going to be disappointed.  However, as followers of Christ, unless it is a gospel issue–which this is not–we must submit to those God has placed over us.  Both Paul (Romans 13) and Peter (1 Peter 2) urged their readers to submit to governing officials.  Just as a reminder the officials to whom they asked the readers to submit were the same leaders who were putting them in prison for sharing the gospel!

5.  Trust in God.  In the days ahead you may be directly affected by whatever the outcome is.  There is a real possibility that your finances could become much more of a challenge.  If that is the case, use that situation to put further trust in Christ.  Our trust can’t be in jobs, bank statements, insurance policies, or benefits–it can only be in God.  All things in this life will pass away.  As Job said, “the Lord gave, the Lord has taken away, but blessed be the name of the Lord.

While you have a right to have an opinion on what should or should not take place, and you have a right to voice your opinion and concerns, in the days of ahead don’t be a political activist but be an activist for the things of Christ.   This life soon shall pass and how embarrassing will it be when we meet King Jesus if  we spent all of our time and energy trying to make our best life now rather then pointing people to the next!  May we not waste the political unrest.